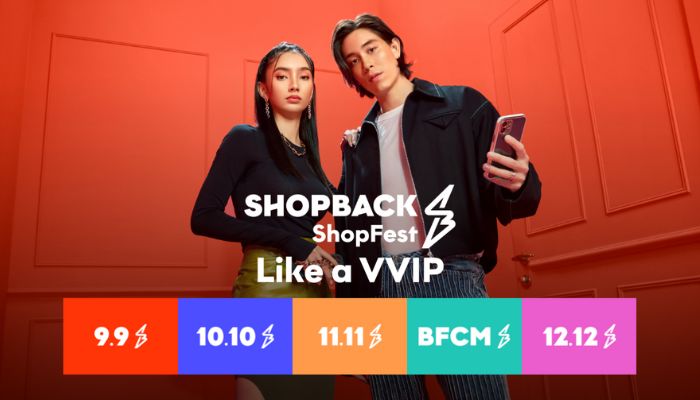 Singapore – ShopBack is returning with ShopFest 2022, the shopping festival it dubs its ‘largest’, having it slated for a 4-month run. September marks the countdown to the year-end holiday season and ShopBack’s festival comprises the biggest sales events – 9.9, 10.10, 11.11, Black Friday-Cyber Monday (BFCM) and 12.12.

ShopFest 2022 is a global initiative across all of ShopBack’s 10 markets and is actually now in its 5th year running. The massive shopping event seeks to achieve the same – continue driving sales for businesses across the island in the year-end shopping season.

As ShopFest launches this year, it will be the first time users will be able to run their shopping experience in the presence of two new ShopBack features launched earlier this year – ShopBack Pay and ShopBack PayLater. In line with ShopBack’s new brand tagline – ‘For The Wins’ – this year’s ShopFest is themed around the concept of ‘Like a VVIP’, which promises ‘to go above and beyond’ to deliver the best deals to ShopBack’s users.

“Our goal is for shoppers to feel a sense of personal victory every time they shop with us. With ShopFest 2022, we are going above and beyond to serve our fellow shoppers – our VIPs – with the best experiences and deals. At the same time, we want to encourage users to explore and experience the benefits of our recently launched ShopBack Pay and PayLater features, for a complete and integrated shopping journey,” says Fern Nannaphat, country manager of ShopBack Singapore.

According to ShopBack, last year’s ShopFest saw a 7x increase in merchants’ e-commerce sales on mega shopping days. This year, ShopBack is expecting to surpass its previous year’s performance with an average of 11x increase in sales generated for merchant partners during each of the 5 mega sale days.

Nannaphat also shares, “Looking back at ShopFest last year, the top performing shopping categories other than general marketplaces were in beauty, fashion (especially athleisure & cross border merchants) and health supplements such as vitamins and protein. However, we believe this year’s rendition will be vastly different. With the prevalence of ‘revenge travel’, the trend is likely to change with travel expenditure expected to top the charts, followed by the fashion category through athleisure brands like lululemon, Nike and Uniqlo as some of the fastest growing e-commerce brands since the start of the year.”

To kick-start the festival, this coming 9.9 mega sale day, ShopBack users may shop to get 10 extra chances to win S$100,000 worth of Tesla shares. The top spending VVIPs will also win up to S$50,000 worth of exclusive experiences at each mega sales day. This includes experiences such as a pair of F1 Singapore Grand Prix Padang grandstand Tickets worth S$1,200, a luxury yacht experience for eight worth S$1,200, and a pair of 2-Day VVIP pass to ZoukOut worth S$1,100.

In addition, top five VVIPs will be selected to participate in ShopBack’s first-ever game show, The VVIP Circle, where they will stand a chance to win up to S$2,000 in cash. The show will be aired on the ShopBack app one day before each mega event on – 9 October, 10 November, 24 November, and 11 December, from 8 pm to 9 pm.