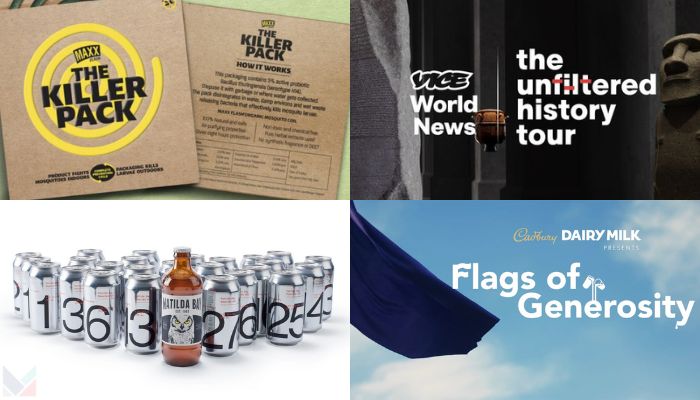 Cannes, France – The Cannes Lions Awards is currently in full swing from 20 to 24 of June this year at the city of Cannes in France. The global awards show celebrates the value of creativity in branded communication: from product and service development to the creative strategy, execution and impact.

For the first and second day of the awards, we take a look at the brands and agencies across Asia-Pacific that have won so far.

In the ‘Health & Wellness’ category, Maxx Flash’s ‘The Killer Pack’ campaign alongside VMLY&R Mumbai won the Grand Prix category. This mosquito repellent, made from 100% biodegradable, innovative packaging which kills mosquito larvae when disposed in garbage dumps, dustbins and stagnant water, helping to break the vicious cycle of threatening diseases like dengue and malaria in India.

Other APAC campaigns that won in the category include:

Meanwhile, APAC winners for the ‘Outdoor’ category include:

For the ‘Radio & Audio’ category, ‘The Unfiltered History Tour’ by VICE and Dentsu Creative Bengaluru won the Grand Prix award, as well as garnering a Silver Lion award for media and entertainment and a Bronze Lion for audio-led creativity as well as cultural insight. The campaign is a creatively ground-breaking unofficial podcast guide to the British Museum’s disputed artefacts.

In the ‘Industry Craft’ category, APAC campaigns that won include:

For the ‘Digital Craft’ category, ‘The Unfiltered History Tour’ by VICE and Dentsu Creative Bengaluru won another Gold Lion.

Meanwhile, the campaign ‘Find Your Own Way’ by Otsuka, Dentsu Inc. Tokyo and Spoon Inc. Tokyo won a Bronze Lion for production design and art direction under the ‘Film Craft’ category.

In the ‘Design’ category, APAC campaign winners include:

For the ‘Entertainment’ category, here are the winners: