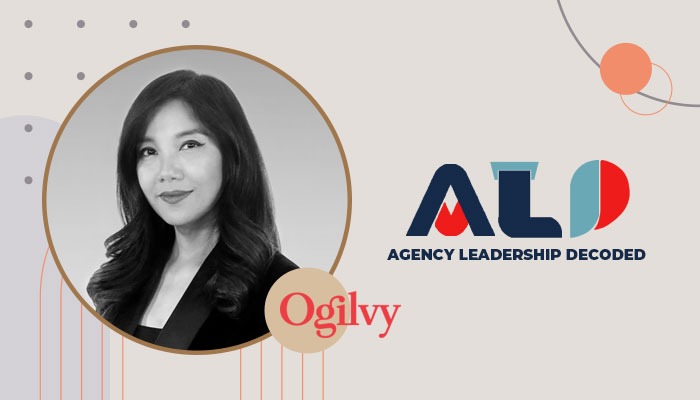 Change. For Jiravara Virayavardhana, Ogilvy Thailand’s managing director, leading her people revolves around the only constant matter in this world – change.

The 6-year MD believes that leadership is the ability to successfully lead people “to win over change.” Sure, this philosophy emanates from Ogilvy Founder David Ogilvy, but Jiravara as a leader, is taking this concept as her own, and adapting it to the contemporary challenges of her time.

She says, ‘The bigger you are, the bolder you must become.’ More often than not, everybody rallies behind the smaller and nimbler teams, but Jiravara believes there isn’t any reason that the bigger firms can’t be as agile and sprightly when it comes to change.

This is in the case of Ogilvy – as a large network agency with a global presence, the advertising firm is in an incredibly advantageous, rather than restricting, position to be a driver of change.

Leaders must have the courage – to embrace the unexpected, to try the untested, and to charter the unknown territory – and they will surely conquer the furious tides of change.

Building the ‘the immunity for change’

The Ogilvy ethos couldn’t stress enough the power of flexibility and adaptability to change. As such, every move the global collective does is being aimed toward building ‘the immunity for change’ – that is, being equipped with a special combination of new and crucial skills in order to propel the agency in being the top of the competition against the never-ending unpredictability of the market and the industry.

And who better person to lead this charge for the Thailand team than Jiravara. The leader is a veteran communications consultant and has been with the agency in Thailand for about two decades now. ‘The immunity for change’ principle is being held at the core of every internal initiative developed within the agency.

Our initiatives come from the idea of how we can most effectively inject the ‘immunity for change’ into our people: we need to both stimulate their minds and nourish their souls

Marketing campaigns are now measured against their strategic use of data, and in Ogilvy Thailand, putting in place internal programs to keep the team highly motivated is no different.

Amongst the agencies’ team initiatives is the ‘Super U’ program which was inspired by the World Economic Forum’s Future of Jobs Report and is built to equip people with the skills for the next decade. According to Jiravara, the program consists of workshops for every capability – from client service, planning, to creative departments. She shares that through it, the team is made empowered to think more sharply and analytically and do their jobs faster and more productively, and ultimately, help them stay ahead of the new developments in data, technology, and digital transformation.

Of course, there’s to nurturing their creative geniuses while there’s also taking care of their wellbeing. For the latter, Ogilvy Thailand has what is called ‘[email protected]’. Aimed at nourishing their souls, the online toolkit reveals the science and principles of well-being that will benefit team members’ professional and personal lives; meanwhile, its ‘I Am Here initiative’ is a safe community for employees to raise their mental concerns and get peer support.

Ultimately, Ogilvy lives out the principle that existing leadership is only meant to beget future innovative leadership. In line with this, the agency in Thailand has developed Diversity & Inclusion schemes such as ‘30for30’ – a leadership program that is designed to encourage and challenge strong female talent at Ogilvy to reach their full potential.

Most awarded creative agency in Thailand

Jiravara must have been hitting the home run with her team to make Ogilvy Thailand the most awarded creative agency in the country; the agency has recently been named Cannes Lions’ Top 3 Creative Agency of the Decade in the region.

Jiravara says, “All initiatives are driven by data. We have a systematic collection and analysis of data to determine what issues have the most impact and need to be addressed first.”

On the performance side, she shares the internal programs have significantly improved the agency’s winning rate. People are able to complete difficult tasks faster and more efficiently and are able to generate more leads within shorter timeframes. Its clients have rated them 88% in service quality in the Vantage satisfaction survey and the majority of their top 20 clients have continued their partnership with the agency.

Jiravara shares that despite these achievements, what’s most important, above all, is knowing that its employees are happy and proud to work at Ogilvy and highly recommends it as a place to work.