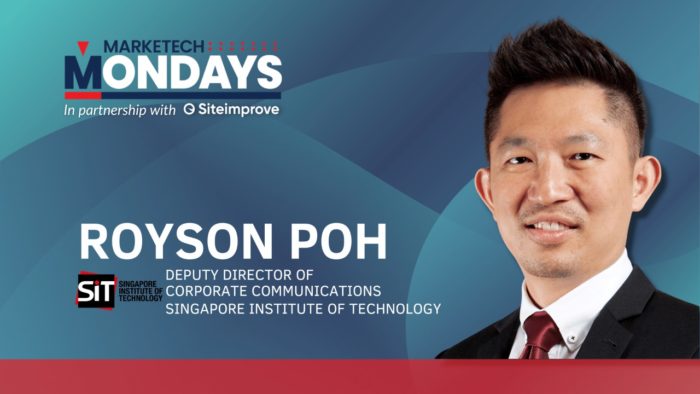 For this episode of MARKETECH Mondays, our feature showcasing marketing leaders’ career journey to inspire the next generation of marketers, we sat down with Royson Poh, the deputy director for corporate communications of the Singapore Institute of Technology (SIT). Royson has held the position since 2018 and no one would have imagined that with such an esteemed role in communications, Royson actually had his start as a credit analyst at a credit bureau.

The turning point was when within the said analyst job, a supervisor had challenged Royson to take on a responsibility meant for sales which became the spark for him to transition beyond his initial chosen profession.

Since then, Royson forayed to roles in business development, and for his very first marketing position, he managed the advocacy & outreach efforts of the Society for the Physically Disabled (SPD) in Singapore. Today at SIT, Royson helms the corporate communications department where he watches over the university’s brand research, web, and social media efforts.

Royson cut his teeth in campaign management when he was working at SPD. His very first campaign was a national IT literacy program for persons with disabilities with Singapore’s Infocomm Accessibility Centre.

The campaign’s objective was to drive awareness and registrations for the said national IT training program. Royson shares that this was right at the point where Facebook had just become part of the marketing mix.

I recall creating my own FB account, testing posts, and figuring out how I could use Facebook to achieve my campaign objectives.

Fast forward to today where digital is now held at a premium, Royson’s leadership at SIT includes heading the school’s web communications and social media efforts. Royson shares in the MARKETECH Mondays interview that he sees his current role as becoming an advocate for digital media, serving as the middle man between on-the-ground social media specialists and senior management.

“The leadership of the university is typically [going to] be a little bit more senior, [and] they may not be that familiar with social media and digital channels; so for me, I am the middle man working with the folks on the ground who know the channel and the technology [as well as] the agencies who are the specialists, and then kind [of] lobbying for that support or rationalizing with management and getting the buy-in,” shared Royson.

Royson entered SIT in 2014 and was first the assistant director for corporate communications prior to being elevated to the deputy director role. As assistant director, Royson was already responsible for the university’s online branding, communications, and reputation across web and social media. Meanwhile, rising through the ranks, the higher directorial position had him delivering the university’s first digital-led brand campaign which was conceptualized to address specific insights from brand research.

How a banking background helped Royson transition to marketing

Royson admits that although quite distant, having had his beginning as a credit analyst served as a big help in helping him understand the demands of a marketing job, which has now grown to include data, analytics, and measurement at its heart.

“[Like] many students, I studied what I was good at, and I was good with numbers. And so I took a banking major, and started working in the finance industry,” shared Royson.

Obviously now speaking with more expertise and deep insight into the industry, Royson said that while marketing used to be a very subjective field, data has now become a very important part of marketing now involving analytics, web traffic, and social media metrics.

I think for the young people who are entering the industry and the digital age, they will never realize that marketing used to be a very subjective field. You had a lot of creative types, people working with designs…but that has slowly gone away. I mean that is still a skill set that you need, but data has become very very important.

As deputy director for SIT, Royson actually developed a brand management framework alongside producing the first quantitative measure of the university’s brand equity.

Royson said, “The numbers part of the work has really helped me. I see a lot of common skillsets [between] finance [and] marketing especially in the area of data analytics to be able to digest and look at numbers and direct marketing efforts from there. That has been a common thread across my career,” said Royson.

On leadership: “Everyone needs a sense of role and purpose in the team.”

Entering SIT in 2014, Royson was assistant director for corporate communications for four years, where in 2018, he was appointed to his current role of deputy director.

As a marketing leader, Royson strongly believes in entrusting a team member a specific role by which the person can grow with and eventually gain mastery of.

Everyone needs a sense of role and purpose in the team. They need to come to work knowing that ‘everyone is counting on me’ for this part of the work.

Royson compares his preferred approach to the usual rotational work setup. He shares that while this is the way to be in many creative setups, where there is a ‘special assignment’ method and people get assigned to projects, he still believes in the positive result of charging someone a focused role.

“I think that if someone knows what they’re uniquely good at, and they have been entrusted that role, they will come back to work every day [having] a purpose, and they’re motivated.”

Royson adds, “My approach to leadership is really to be very clear about responsibilities, creating roles for individuals, trusting them to do it well, and encouraging them to give them that sense of purpose and that belonging in the team.”

For the new generation of marketers: Keep learning and re-learning

As a marketer part of the generation that was at the cusp of traditional and digital marketing, Royson shares that it’s very important to never stop learning and to add to one’s experience and knowledge as this is the way to be at par with the ever-evolving industry of marketing.

It’s very important to have this ability to keep learning and re-learning amid fast-evolving technological advancements in marketing.

On advice for budding marketers

Aside from this overarching view on marketing, Royson also shares his advice on dealing with day to day challenges of the job.

He shared that throughout his career, he learned that sometimes, there is a need to be able to say no and to be able to do that in a professional and mature way, and in a way that delivers value to the organization.

“The biggest challenge of my career is learning how to analyze something critically and having that skill to be able to deliver [an opinon] in a professional and non-confrontational way that would help to complete the final product.”

Royson said that in marketing, it’s important to find a way to express diverse opinions in order to successfully co-create as a team.

Also, his very simple advice, but one that’s equally crucial in the cutthroat world of marketing: becoming your biggest ally and supporter.

“We face a lot of criticisms in a marketing profession so it’s important to be your biggest supporter and all,” he said.

Ultimately, Royson to the aspiring marketers, “You will never know everything that you need to know [in marketing], you just have to keep figuring it out as you go along.”

Listen to the full podcast of the interview with Royson on Spotify: