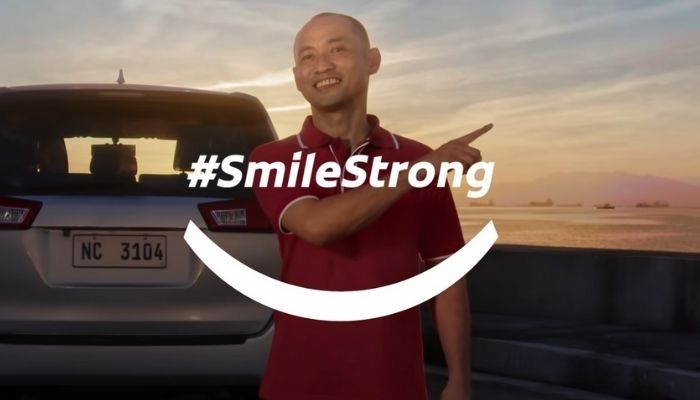 Manila, Philippines – Following the success of the #SmileStrong campaign launched in 2020, Colgate in the Philippines has launched its latest ad under the campaign, which is a call to action for viewers to have the courage to take action, regardless of life’s challenges.

The previous local campaign featured various personas, namely teacher and motivational speaker and born with down syndrome Brina Maxino, local actress Candy Pangilinan who is mother to a son who has ADHD, and Arizza Nocum, peace advocate and entrepreneur who co-founded KRIS, a non-profit organization promoting peace through education. Said campaign saw the personas share people’s judgments of their capabilities and capped it off with a positive “I smile.”

In this latest ad, Colgate features Marlon Fuentes, a Grab taxi driver who has Tourette syndrome. In it, Fuentes describes that due to his condition, including uncontrollable body movements and twitches, he is easily being judged by many passengers. However, he goes on to say that he can’t just simply shrug off the negative impressions from other people, as he chose to accept who he is.

The campaign’s inspirational tone exudes the campaign’s goal of staying positive, with Fuentes stating that just like how he takes care of his own family, he too can assure his passengers that he will drive them safely to their destination.

“Moving ahead into 2022, the Colgate team are continuing their ambition to deliver real impact on society and elevate equity across borders. In the Philippines the team looked for new personalities to lift the spirits of the nation battered by the ongoing pandemic. The sense of ‘pangiti-ngiti lang’ (just smiling through it) was prevalent, and the team wanted to find true optimists whose spirit would rise above this,” the company said in a press statement.

The campaign was made by Red Fuse, WPP’s integrated global team dedicated to serving Colgate-Palmolive.

Speaking about the creative process of the campaign, Dino Ocampo, executive creative director at Red Fuse said that it was a pleasure to highlight the heroism and inner strength of a driver with Tourette’s syndrome, and show how he manages to overcome not only his condition, but the prejudices of those around him.

He added that Fuentes’ captivating optimism has managed to transform and elevate all of them at the team who were fortunate enough to work with him.

“With the pandemic reaching a critical point in the Philippines throughout the last year, overall community morale was at an all-time low. Trying to push a message of optimism in a time and place where people could barely find a reason to smile, was a challenge,” Ocampo stated.

He added, “Meeting Maron was like a breath of fresh air. He inspired us all. Our talented director Direk Joel Limchoc, was energized by his outlook and really set the tone to build his story in a way that was meaningful to us all and which also aligned to Colgate’s stance on ‘Optimism in Action’.”

Colgate’s #SmileStrong campaign is an ongoing brand campaign which aims to focus on equity advertising by highlighting select people as their ‘muses’ to best represent their vision of creating ‘a future for everyone to smile about’. The campaign itself has been rolled out in the past few years in the region, including in Thailand and Malaysia.