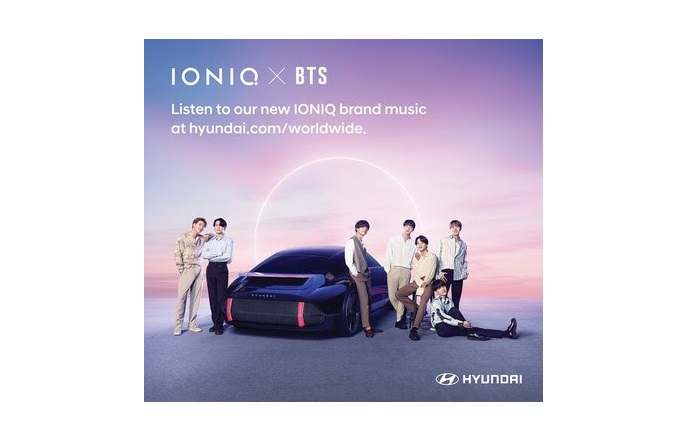 Seoul, South Korea – Hyundai Motor and global superstars BTS are releasing a new song, “IONIQ: I’m On It” as one of the first ever campaigns of Hyundai’s new electric vehicle brand, IONIQ.

This will be BTS’ first music project with Hyundai. The song will be available for free download on the brand’s website starting August 31.

Meanwhile, the music video will be premiered on the company’s official worldwide Youtube channel, HyundaiWorldwide, on September 2nd at 11:00 AM, Korea standard time, where it is said to feature Hyundai’s latest electric vehicle (EV) model, Prophecy, unveiled in March.

The brand song “IONIQ: I’m On It” intends to give voice in line with the IQNIQ’s goal to offer customer centric EV experiences centered on connected lifestyle solutions.

The song carries the refrain ‘IONIQ takes me there.’ The lyrics – sung and rapped by BTS’s RM, Jin, SUGA, j-hope, Jimin, V, and Jung Kook – has been made to express feelings of “discovery, curiosity, hope, creativity, and inspiration for the future.”

Global Hyundai CMO Wonhong Cho said “Hyundai Motor and BTS have continued to collaborate to spread the value of the positive energy they pursue together beyond advertising specific vehicles. The new IONIQ lineup is Hyundai Motor’s answer to environmental problems and sustainable global communities that Millennials and Gen-Z generations are concerned about.”

Just this August, Hyundai Motor unveiled the IQNIQ brand dedicated to offering its battery EVs. The company is set to introduce three new EV models: IONIQ 5, IONIQ 6, and IONIQ 7 over the next four years, with IONIQ 5, which is a midsize CUV to be launched in early 2021.

To further engage fans on the IQNIQ campaign, Hyundai will be rolling out an online contest where a limited-edition cassette tape-shaped music player which contains two tracks – “IONIQ: I’m On It” and individual messages from each member of the band will be given out to winning fans.