Nissan pivots brand positioning, inspires people to “dare the impossible, until it’s not” 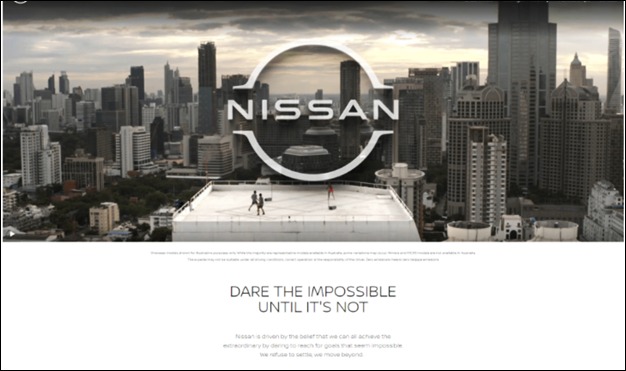 Bangkok, Thailand – The Asia and Oceania legs of international vehicle brand Nissan unveils a new brand campaign, which it claims to be bolder than its previous ones, carrying the central tagline “Dare the impossible, until it’s not.”

The fresh campaign is initially launched in four key markets of Thailand, Indonesia, The Philippines, and Australia. It leads a digital-first approach, and for the first installment, a brand-led video has been recently released in the region, whereas for the new brand website, it premiered on September 14 in the first batch of countries except Indonesia.

In a press statement by the company, Vice President for Marketing in the region Nirmal Nair is quoted to have said, “We warn those who want traditional approaches to please not watch our new Nissan brand campaign or they will be disappointed.”

The video, which was released on YouTube, features three individuals, each shown to endeavor in an activity such as playing badminton and operating a drone, and are depicted pushing themselves beyond their comfort zone.

The website on the other hand, now bears the main tagline on its landing page, with a sub-description, “Nissan is driven by the belief that we can all achieve the extraordinary by daring to reach for goals that seem impossible. We refuse to settle, we move beyond.” The video is also now embedded in the home page.

Nair said, “Do not expect the Nissan you think you know. Today we have a new attitude, new look, new swag, new services, [and] new cars.”

He added, “Brands need to be genuine to themselves. That’s why Nissan has taken this bold step. Daring to be different is in Nissan’s DNA. Our rich history of invention and ‘world-firsts’ defines our innovative present and now, our promise of a bold future. This campaign is aligned to this direction.”

The strategy of the campaign is multi-platform and will involve a wide use of a newly implemented tech stack to do precision marketing among a freshly defined brand audience. The company said that its aim is to excite prospects and drive them to the newly structured website, where they can explore the real Nissan and its heritage of innovations and pioneering technology.

“Building a thriving brand is our top priority, backed by our strategy to be the innovative challenger, [and] supported by electrifying one in four vehicles in Asia and Oceania under our mid-term plan,” said  Nair.